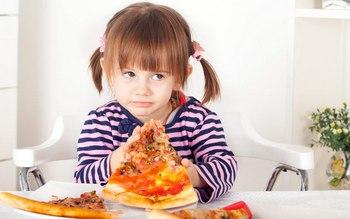 Food poisoning is an acute non-contagious disease caused by toxins entering human body with foodstuffs. It features no age restrictions. But children are more prone to food poisoning, which is explained by the functional immaturity of their immune and digestive systems. Therefore, child's body is not yet able to resist acting toxins entering the gastrointestinal tract to the fullest. The response can be quite pronounced, which sometimes represents a certain lofe danger.

After poisoning, the child does not develop a permanent immunity. This explains possibility of recurrence of the disease, and the food toxins are different.

Depending on the cause, there are 2 types of food poisoning in the child:

Infectious poisoning in a child is most often caused by having food contaminated with a large number of microbes. The most common of them are salmonella, proteus, E. coli, clostridia, listeria. Some of them are uniquely pathogenic, others are related to the conditionally pathogenic flora and can be discovered in some quantity in intestines of healthy people .

The bacteria are dangerous not only in a living form. While dying and destroying, they release endotoxins (toxic substances stored in cells). They enter sufferer`s blood and negatively affect performing vital organs and the whole body as a whole. This kind of is labeled as food poisoning in medicine.

Some bacteria actively produce poisonous substances in the process of their vital activity. They are called exotoxins. They can persist in meal for a long time after the microorganisms die. If childish poisoning is caused by these substances entered, its diagnosis is called food bacterial toxicity. The example is botulism.

What products are considered to be potentially dangerous?

Potentially dangerous bacteria can be found on almost all products. But for occurring poisoning symptoms in children they need to get into the body in a sufficiently large number. Therefore, alertness should be provided in relation to treating products first of all, because they can become a breeding ground for developing harmful bacteria.

Of course, children should not be deprived of the products. After all, many of them are a source of useful nutrients necessary for growth and development. But it is necessary to pay attention to the quality and freshness of the products used to feed the baby. Poisoning is often a consequence of the repeated thawing, prolonged presence in room temperature, insufficient heat treatment. Teach children cook and have healthy high-quality home meal, acquaint them with the product storage rules.

How food poisoning gets evident

Food poisoning features short incubation (latent, pre-symptomatic) period. The first signs of the disease usually develop quite sharply, by the end of the first day after infection. And with non-infectious poisoning, a child can get worse after a few hours after taking a poisonous product.

The time of appearing and rate of increasing symptoms depend on the rate of absorption of toxins in the digestive tract. Sometimes, a sick kid gets worse gradually, step by step. But growth of symptoms is possible and rapid too, including developing life-threatening infectious-toxic shock.

Main signs of food poisoning include:

With non-microbial food poisoning, signs of damaged brain and internal organs can appear. However, intestinal symptoms are usually quite weak. And with botulism, they can be absent.

How to behave when a child is poisoned

Do not underestimate potential danger of childish food poisoning. Even if the child initially feels relatively good, its condition can quickly go down. This is due to the absorption of an increasing number of toxins in its intestines, adding and growing dehydration, deteriorating cardiovascular system against the background of intoxication.

Therefore, consult the doctor as early as possible, even if the child's condition does not cause serious fear. But do not neglect first aid measures.

What should I do at home when my child is poisoned?

These measures are usually enough to wait for the doctor to examine sick child. Further treatment of poisoned children should be carried out under the supervision of a specialist.

Do not start taking antimicrobial drugs at your will, because this can provoke a massive death of bacteria and releasing significant amount of endotoxin. In addition, while providing antibacterial treatment, it is very important to choose the optimal dosage taking into account the child's age and other factors. Only a doctor can do this competently. The specialist should decide what to give a child when poisoned. Folk techniques (for example, taking rice or oat broth, cinnamon or another herbal tea) can also be used only according to the doctor`s advice.

How to treat food poisoning 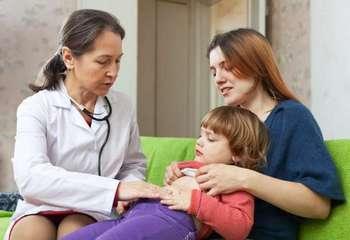 When child suffers from food poisoning, treatment is prescribed taking into account a number of factors. Consideration is given to the cause of the disease, age and general condition of the small patient, the severity of his intestinal symptoms and signs of dehydration.

The basic scheme for treating poisoning of microbial origin is:

Sorbents in the treatment of food poisoning

Sorbents are now considered as key drugs for treating food poisoning. After all, it is thanks to them that it is possible to reduce the severity of intoxication at the early stages of the disease, when the antimicrobial agents prescribed were not yet in effect. Properly selected sorbents are also able to reduce severity of nausea, vomiting and diarrhea. This will reduce risk of rapid dehydration and developing other complications.

When choosing sorbent for the complex treatment of food poisoning in children, preference should be given to modern remedies approved for applying by 1-year old baby. It is desirable that they also do not irritate the stomach, are not absorbed and have a wide range of adsorption capacity. All these requirements are met by Filtrum®, a lignin-based preparation made from wood. It is able to bind and remove pathogenic bacteria, toxins of microbial and non-microbial origin, an excess of some metabolic products formed in the body out of the intestine. Filtrum® can be applied to detoxify during food poisoning in 1-year old children.

Important: Before using, read the instructions or consult your doctor.