Salmonellosis is an acute infection affecting digestive system and developing by Salmonella bacteria entering the body. It is accompanied by gastritis, enteritis, colitis, signs of intoxication and dehydration. A ttyphoid-like course of the disease is pretty rare.

The causative agent is a rod-shaped bacterium. It lives for a long time in food (for example, in frozen chicken meat it lives more than a year). When storing eggs in the refrigerator for a month, the pathogen penetrates through the shell, infecting inner contents.

Most often, eggs cause infection, when subjected to insufficient temperature treatment, as well as dairy products and meat. Salmonellosis can develop according to two different scenarios, which are called gastrointestinal and generalized. In some cases, infection and course of the disease occur without any visible signs. Diagnosis can be provided by revealing salmonella in the stool or vomit masses of the patient.

Methods of transmission of salmonella

The primary carrier of the causative agent of the disease is agricultural livestock - cows, pigs, sheep and horses. Salmonella can also damage dogs, cats, mice. Wild birds (eg., ducks) can get a source of the disease too, in which salmonellosis usually develops without external manifestations. These species can carry a bacterium for many years and let it out with urine, hard bowel movements, saliva or milk. A person can get infection if he/she cares for these animals, participates in the transportation or is engaged in cutting and storing meat. The number of chickens infected has been increasing all over the world both in households and in poultry farms during past 30 years.

The second cause of infection is contact with a person who is ill with salmonellosis or is a hidden carrier of this disease. The bacteria transmission usually happens by fecal-oral route, when salmonella from the intestine of an infected person enter the gastrointestinal tract (GIT) of a healthy person. This is possible with insufficient hand hygiene or with careless patient care. You can get infected in public places like hospitals, kindergartens and close office premises, using contaminated vessels, pots, changing tables, towels and other household items. The patient is infectious for a maximum of 3 weeks, the carrier can secrete bacteria throughout the year.

Salmonellosis is proved to spread with the dung of pigeons and other urban birds, dispersing in the air, so do not go close to pigeon packs and prohibit children to do that.

12 months old babies can suffer from the infection particularly. They can get salmonella developing into a dangerous generalized form, which is difficult to treat. Children get less susceptible to salmonellosis over the years, but outbreaks of this infectious disease are possible to happen in people of any age. It appears especially often in summer and seasonal exacerbations of intestinal infections. The disease causes forming immunity existing for less than a year.

With salmonellosis, the incubation period usually lasts from 6 hours to 2 days. Salmonellosis form reveals its symptoms, therefore the corresponding classification is given below:

This form is most frequent event. First the disease develops very rapidly and is similar to food poisoning. The patient features appearing chills, fever, headache, body aches. Gradually symptoms of the disorder of the gastrointestinal tract appear: painful central abdomen, profuse vomiting (first containing particles of undigested food, and then bile), diarrhea (frothy, mucous, stinking green stool and then watery feces). The frequency of stool gradually increases, and the volume goes down. The sufferer experiences dry oral cavity and painful pressured stomach; a white coating covers the tongue, as well as bloating and rumbling happens in the abdomen. Diarrhea ceases only after a few days, so a person experiences severe dehydration accompanied by removing mineral salts. Metabolism is disturbed, convulsions and tachycardia appear, blood pressure lowers. Fainting and dizziness, as well as nervous disorders can also occur. Five days after starting disease, the condition of an adult gradually stabilizes, but the symptoms of salmonellosis completely disappear only by the end of the second week.

Light form. Gastrointestinal salmonellosis in adults sometimes features mild symptoms: body temperature is stable, vomiting torments the patient only periodicaly, and diarrhea happens only 2-3 times a day. In this case, the peak of developing disease occurs on the first or second day, and completely disappearing symptoms of salmonellosis in adults occurs 3 days after starting disease.

Heavy form. In this situation, the patient experiences heavy chills. Vomiting happens very often, and urge to vomit occurs up to 20 times a day. The sufferer gets highly deacreasing pressure and pronounced weakness. This form of the disease has much in common with developing dysentery.

At first, this ailment is very similar to gastrointestinal salmonellosis: the patient experiences severe chills, intoxication, including disorders of consciousness, as well as symptoms of gastroenteritis. A few days later, these symptoms get less pronounced, but a wave-like fever, weakness and headache appear. About a week after infected, a rash can appear on the abdomen for two or three days. The tongue gets grayish or brownish, the skin becomes pale, the liver and spleen increase in size, and the abdomen swells.

Asymptomatic salmonellosis. This ailment usually develops if only a small amount of Salmonella penetrated the body. A person featuring good health is able to overcome the disease fast, while the symptoms are absent.

Bacteriosis. With this form of disease, a person is not sick, but in his/her body is occupied by salmonella, which gradually come out with feces. The course duration can take from several days to three months (acute carriage) or up to a year (chronic carrier).

The code of salmonellosis according to ICD-10 is A 02.0 (salmonella enteritis).

In children, the incubation period lasts about four days, and the concrete symptoms and their intensity depend on the child's age. The most severe form of this disease occurs in infants and babies under 12 months old.

Symptoms of salmonellosis in children:

Diagnosis of the disease is carried out by researching the patient`s feces and vomitic masses. The generalized form is the exception, when the blood is examined for existing bacteria. In some cases, salmonella can be discovered in bile, as well as in the washings of the stomach or intestines.

Immunological reactions are used toprove existing salmonella antigens, for example, salmonellosis enzyme immunoassay, polymerase chain reaction. To confirm the diagnosis, serological revealing antibodies is used with an interval of several days. Plating is carried out too. A sanitary and epidemiological examination is provided by all means, the range of cases is checked, suspicious foods are withdrawn and examined.

It is also necessary to determine dehydration degree. To do this, the blood viscosity, acid-base balance and electrolyte balance are analyzed. Assessing symptoms and prescribing treatment can be implemented only by an infectionist. If salmonellosis occurs with complications, consult a cardiologist, urologist, nephrologist and other specialists (depending on the complications observed).

Treatment of salmonellosis in adults is usually performed on an outpatient basis, bed rest is prescribed if moderate and severe dehydration happens. Salmonellosis in children is often treated in a hospital in the way: 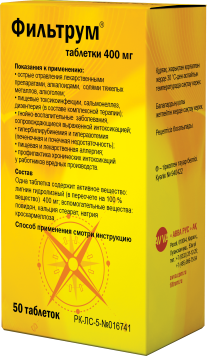 Filtrum refers to the remedies of pathogenetic therapy, interrupting developing disease and speeding up recovery process. This drug with sorbent action attracts salmonella wasteproducts to the surface of its particles, as well as products of incomplete digestion of nutrients. Filtrum is taken for 5 to 7 days against salmonellosis. Dosage and amount of receptions during the day depend on the patient's age. The drug quickly reduces the severity of bloating, diarrhea, helps improve overall health. In order that it does not reduce the effectiveness of medications taken, it should be applied one hour before other medicines.

Employees of food production enterprises and representatives of other similar professional groups when infected with salmonella are hospitalized by all means.

In case of hospitalization 2 days after completing treatment, the patient passes stool test, and if salmonella is absent, he/she goes home. Workers of the food industry go home after double negative analysis got. After recovery, they should undergo regular check-ups.

If the patient is treated at home, his/her isolation from other family members is unneeded. Single-time examination of children and workers of food enterprises contacting with the ex-patient is implemented.

Refuse from all products irritating digestive tract, as well as dairy products. Starvation in salmonellosis is contraindicated, for it can greatly weaken immune system and slow down recovering gastrointestinal tract.

Salmonellosis can be avoided if a number of general rules for preventing intestinal diseases is followed:

Important: Before using, read the instructions or consult your doctor